Find the details of Grand Mosque, Dubai from its wiki, history, opening hours, dress code, online tickets with best deal and best time to visit. Located between Dubai Museum and the textile souk, it’s always open across the year. One of the most popular tourist spots in Dubai, the Grand Mosque represents the rich cultural and spiritual heritage of the city. Situated in the heart of the vibrant Dubai, the Grand Mosque perfectly captures the beauty and glamour of the city along with a touch of divine grace. The Grand Mosque of Dubai is a must-visit for the spiritually inclined traveler as well as the tourist interested in architecture. 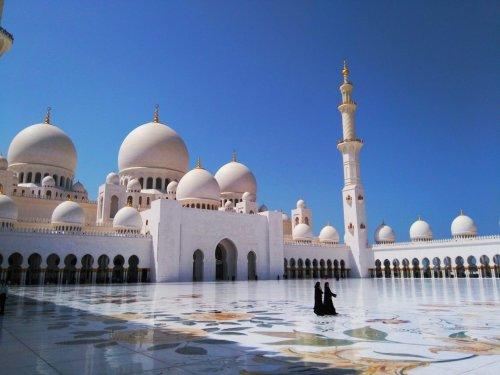 The Grand Mosque, which was founded in 1900 as a school for Quranic studies is currently one of the most popular spots for tourists in Dubai. The mosque, which does not provide the rights of admission to non-Muslim people, however, allows people from other religions to enter the minaret, from where they are also allowed to click photographs. The Grand Mosque, the construction of which was finished as late as 1998, is a replica of the structure that was built in 1900, and subsequently destroyed in 1960.

The sandy grey walls of the mosque, along with the inlaid inscriptions from the Quran add to the spiritual appeal of the spot. The handmade stained glasses on the windows of the mosque make it a part of the old-world charm of the locale of Bur Dubai, in which it is located. Peaceful and serene, the Grand Mosque in Dubai provides the perfect place for the devout to engage with the divine. Those who are interested in the architecture of the structure, on the other hand, can spend hours admiring the geometric precision that went into the construction of the mosque. The mosque is exceptionally beautiful in the evening when its intricate beauty is thrown into sharp relief with beautiful lighting. Don’t forget to check the Al Fahidi Fort which has historical importance and the Hatta Mountain which is a popular tourist place.

The Grand Mosque of Dubai houses the tallest minaret in the city, which stands at a height of 70 m. The minaret overlooks 50 small and large domes, which together provide a unique appearance to the mosque. The serene mosque is capable of accommodating about 1200 worshippers at the same time.

Mosques generally have very stringent dress codes, which is even more stringent in the case of the Grand Mosque in Dubai. The Mosque imposed a very strict dress code on visitors, which consists of modest and conservative articles of clothing. In case of both men and women, it is important to fully cover your arms and legs, and therefore skirts, shorts, and similar garments should be avoided. The fabric of the clothing should be loose-fitting as well as opaque, so that the silhouette of the body may be concealed. The female visitors shall also be required to cover their heads with a scarf, which shall be provided to them on entry. Both men and women shall be requested to remove their shoes on entering the mosque.

It is open from 8.00 A.M. to 10.00 P.M. In order to enjoy a smooth and hassle-free visit, try to plan your trip between the designated hours for prayer. It is also more prudent to avoid a visit on Fridays since it has religious significance for the Muslims.

The entry to the Grand Mosque in Dubai is free of cost.

The best time of the year to visit the Grand Mosque is between the months of November and March, that is, in the winter season.

Don’t think twice before booking your tickets to visit the marvelous Grand Mosque of Dubai, since Jashan Tourism provides you with excellent facilities for traveling to and from Dubai. Enjoy a beautiful and hassle-free trip to Dubai with the services of Jashan Tourism.